Skip to Content
This website uses cookies to ensure you get the best experience on our website.Got it !!
Home Uncategorized Rajma Burrito | Red Kidney Bean Burrito 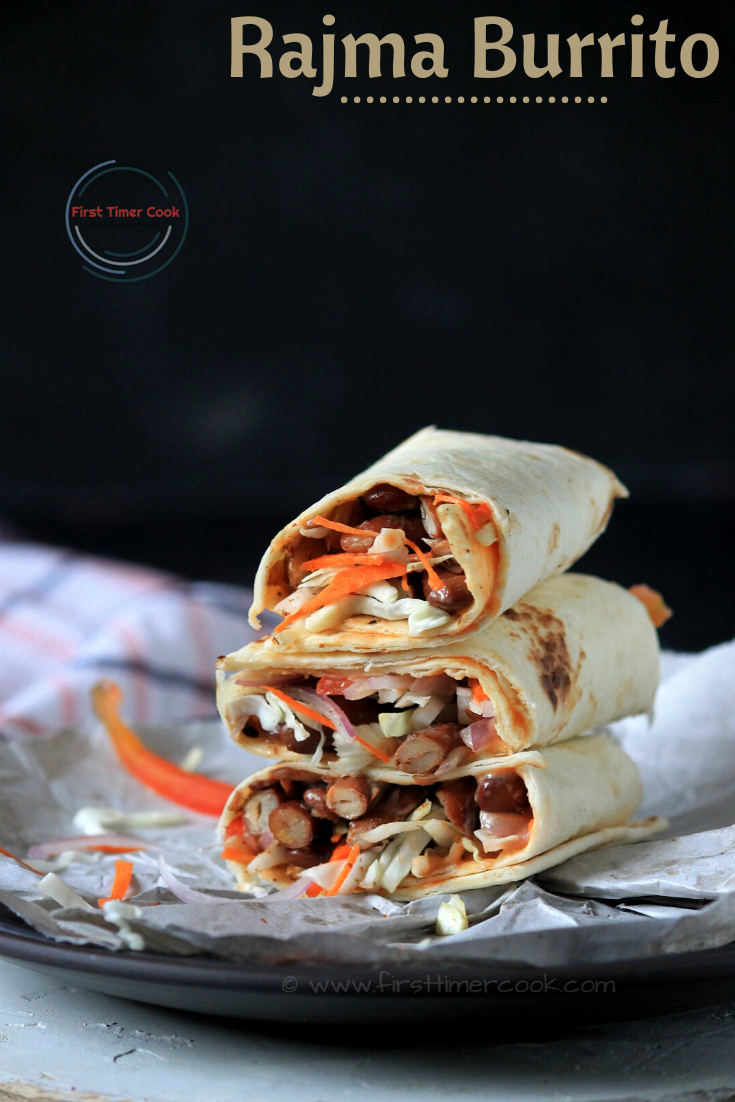 What is Kidney beans (red colored) aka Rajma ?

The name of this lentil is due to the visual resemblance in shape and color to a kidney. The red varieties of this kidney beans are called as Rajma in Hindi and mostly used in India although there are other variety of colors and patterns including white, cream, black, red, purple, spotted, striped and mottled. These are a major source of plant based protein and pack a number of health benefits. These are also rich in various minerals, vitamins, fibers, antioxidants and other unique plant compounds. Therefore these beans can aid weight loss, promote colon health, moderate blood sugar levels. 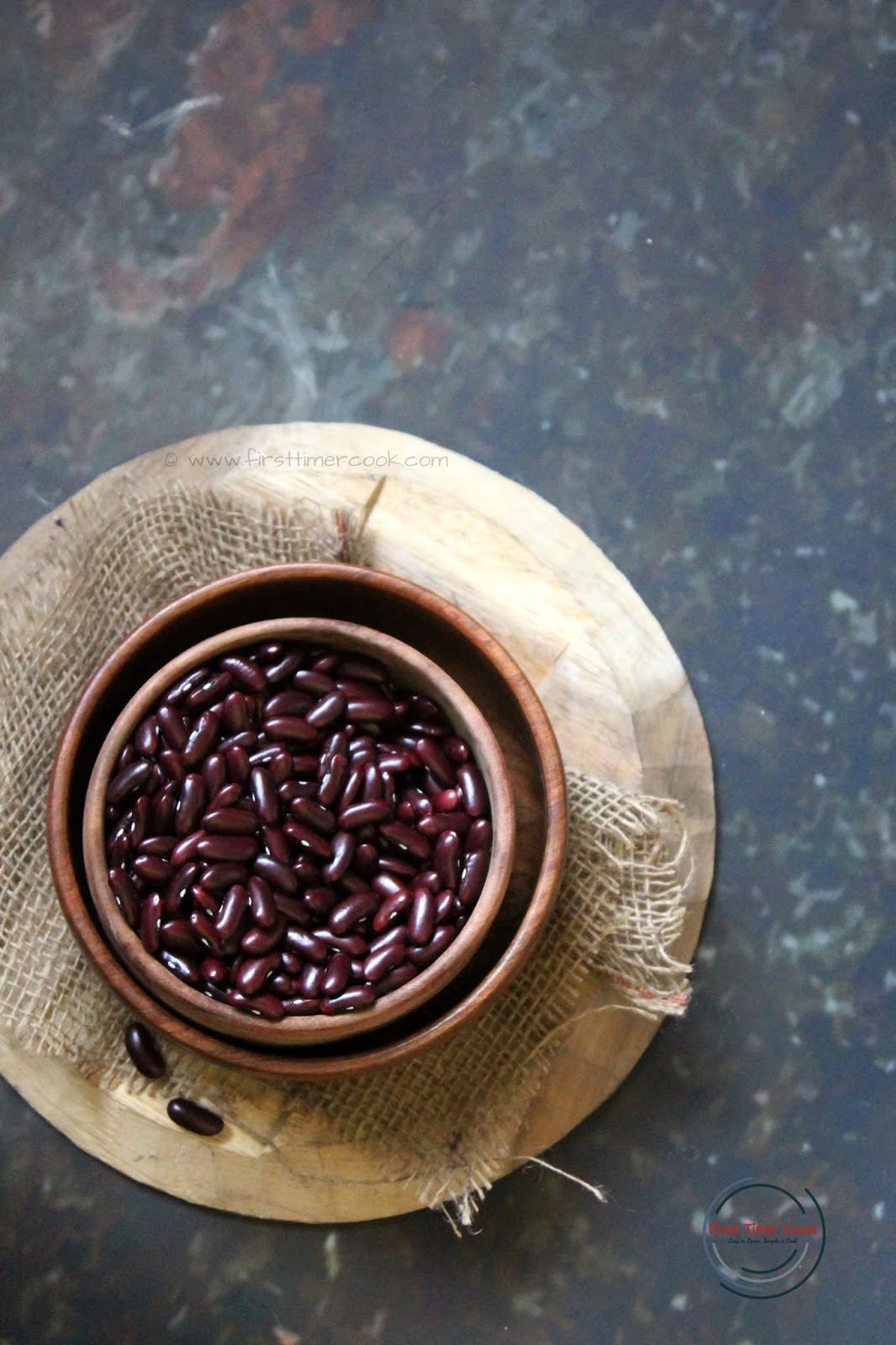 What type of dishes one can make using these beans ?

For an Indian, Rajma masala gravy with onion-tomato masala is one of the most comfort food. Along with a bowl of steamed rice this is a great combo. Apart from this one can make soup, snacks using these red kidney beans. Today’s recipe is a Mexican dish using rajma as Rajma Burrito or Red Kidney Bean Burrito.

These are the tortilla wraps with a filling from Mexican cuisine. Burritos are quick and easy tummy satisfying option which comes in a handy wrap.

Here the wrap is the wheat flour tortilla. I have used the store bought ones. The filling is a mixture of red kidney beans with some Indian spice powders. The tortilla is first smeared with some mayonnaise, tomato sauce and then the rajma mixture is placed in the center of the tortilla. Finally some shredded veggies like carrot, cabbage, tomato, onions are topped and then the tortilla is rolled into a cylindrical shape. After that one can serve it as it is or by cutting into halves. Even also after rolling the tortilla can be lightly grilled to soften a bit. I prefer to slightly warm both the sides of the tortilla before just before using for wrap. Particularly the spreads here one can use as desired. 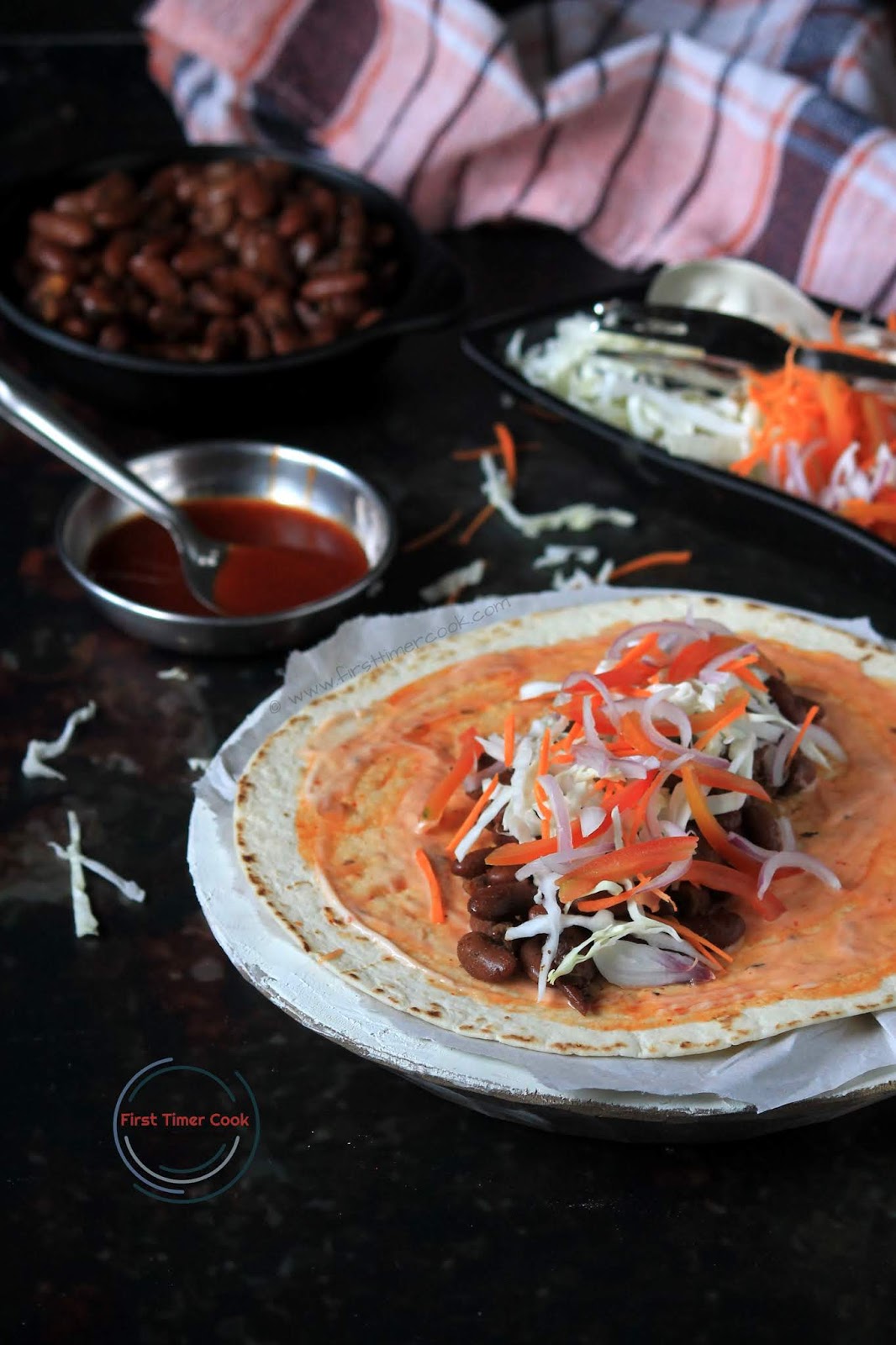 These wraps are so nutritious with the goodness of rajma or red kidney beans inside. For kids lunch box or as an after school snack these are so perfect to satisfy them. Also while in a hurry this rajma wrap is so quick to assemble and have as a lip smacking breakfast or snack. So do try this protein packed Mexican dish with Indian touch ! 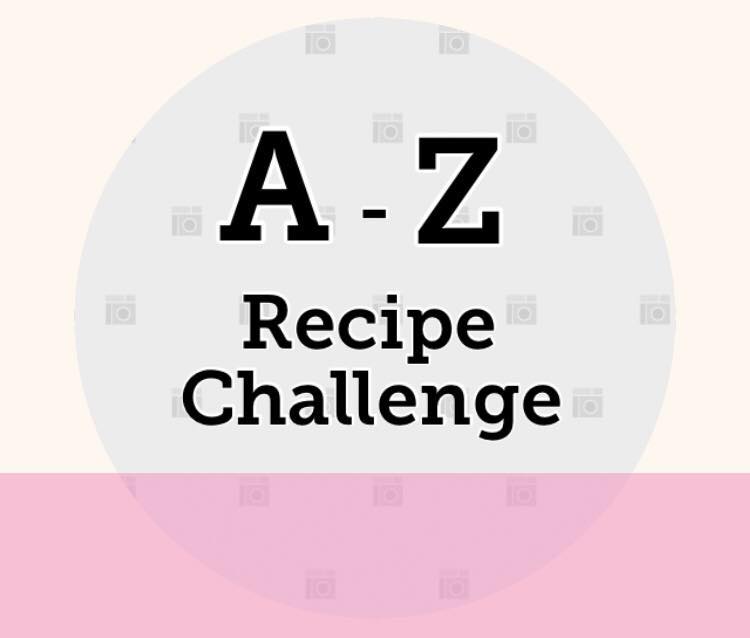 Well for current month the event ‘A to Z Recipe Challenge‘ has come up with the alphabet ‘K‘. That means, there must be a recipe post having the main ingredient name starting with alphabet K. So I opted K for ‘Kidney Bean’ and have prepared Kidney bean Burrito / Rajma Burrito.

The spreads and sauces in this rajma burritos can be of different flavor as desired. 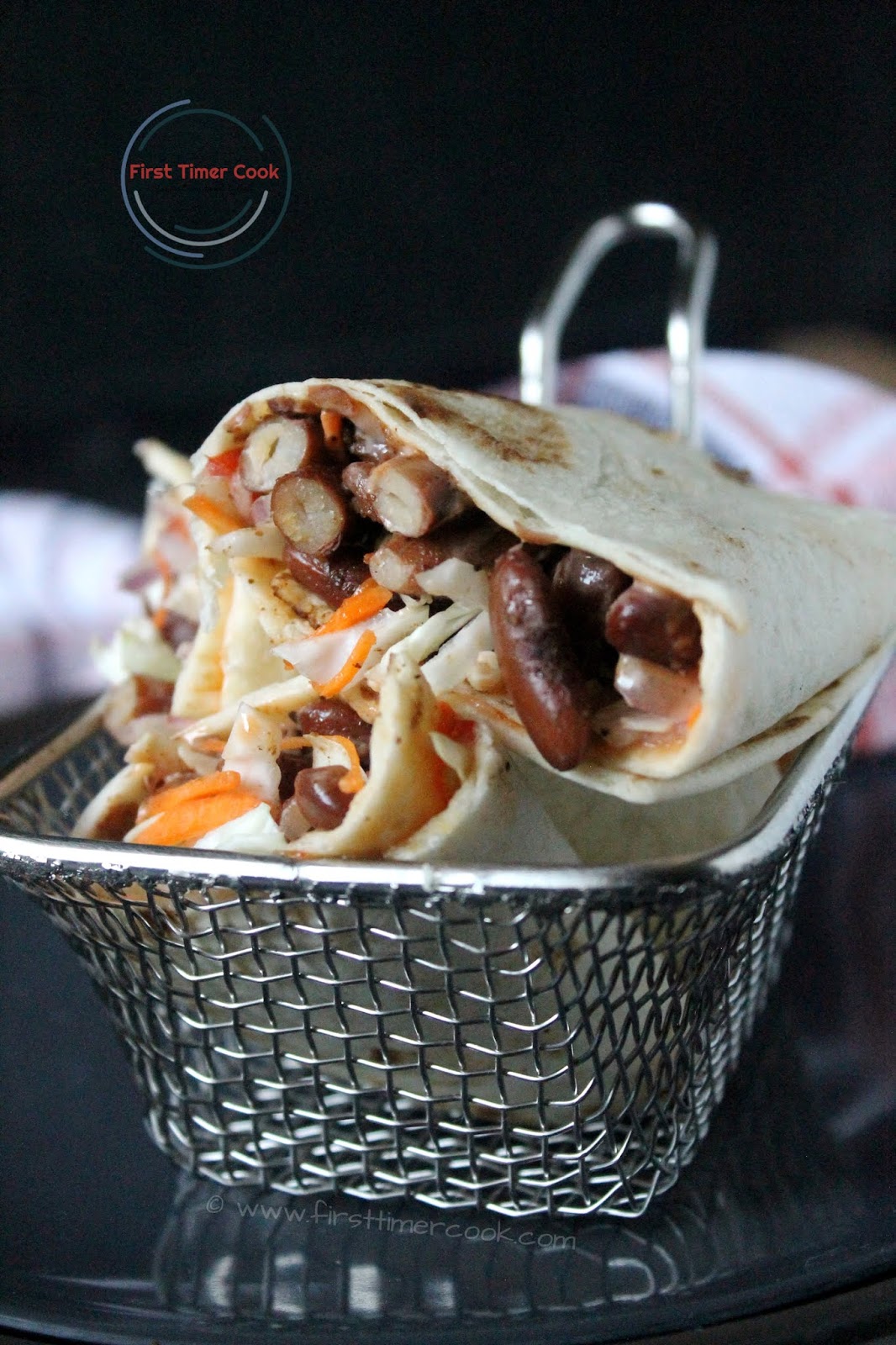 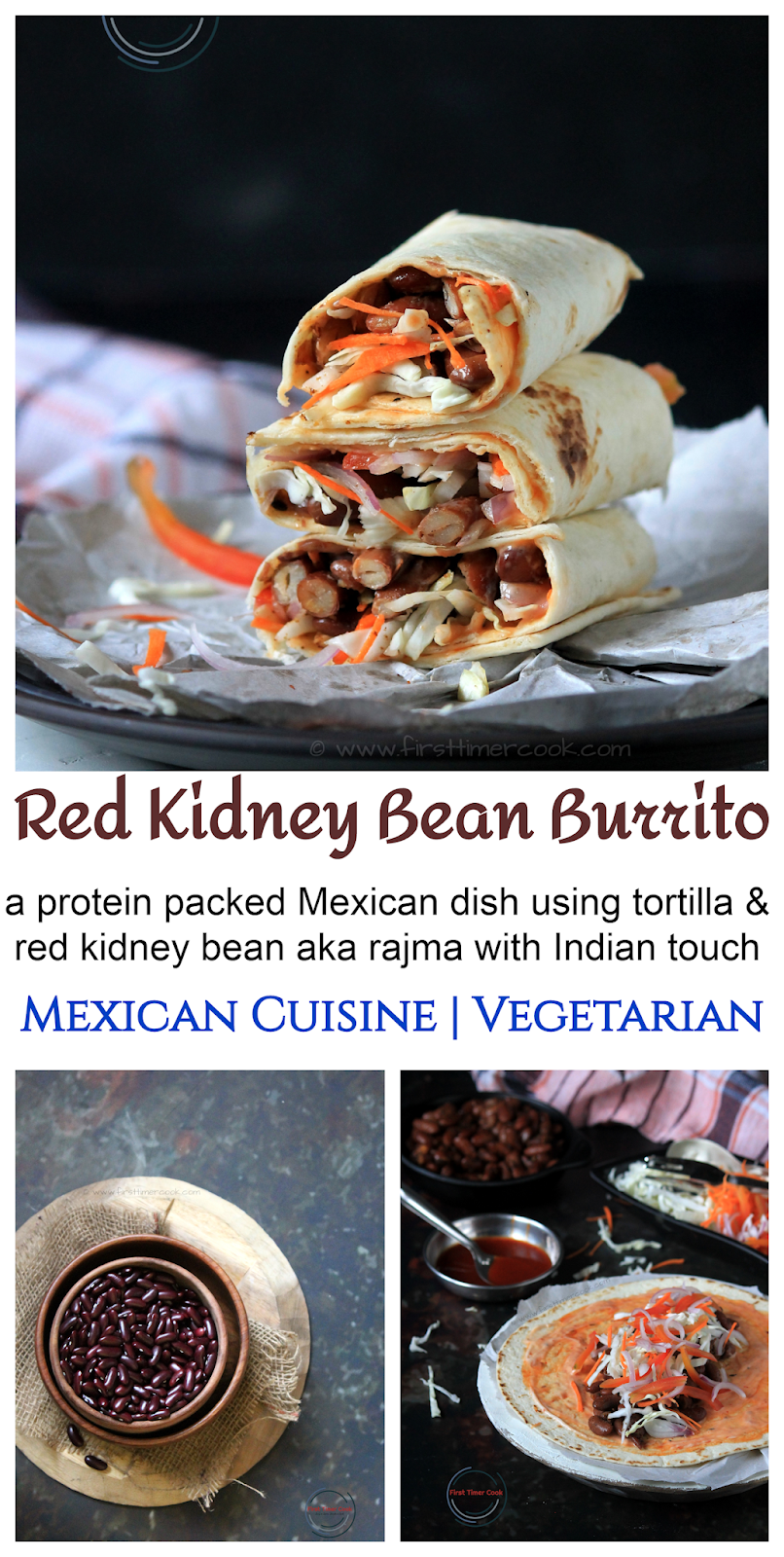