Vada Pav consists of a deep-fried potato ball coated with a batter placed inside a bread bun (pav) sliced almost in half through the middle. This is a popular Maharashtrian street food snack.

Vada Pav is alternatively spelled as Vada Pao, Wada Pav, or Wada Pao. It is a vegetarian fast food dish and also one such quick-selling street snack native to the Indian state of Maharashtra. One can call it an Indian burger.

The patty inside is the Batata Vada. The vada is made of a spicy potato filling coated with gram flour batter and deep-fried. Then it is sandwiched in between a pav bun with some flavorful chutneys and served hot.

Well, the September month challenge in the ‘Shhhhh Cooking Secretly Challenge’ group was the ‘Chutneys and Condiments’, suggested by Preeti. Well, I was partnered with Kalyani for this theme who gave me 2 secret ingredients as Brown Sugar and Coffee; and I gave her Clove and Nutmeg. She prepared Mixed Fruit Jam using those secret ingredients. And as usual, using my two ingredients I have also come up with this Coffee Jelly for the theme contribution. 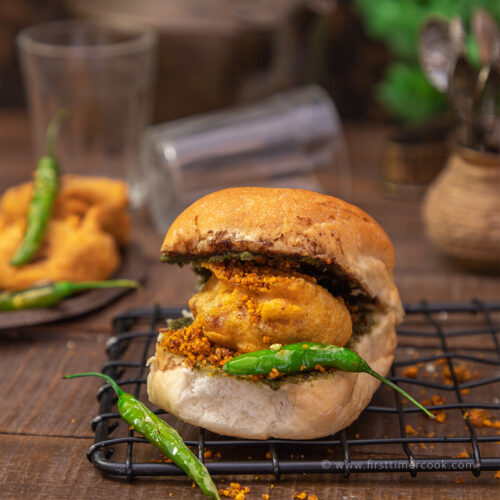