Watalappan is the most delicious and ubiquitous creamy coconut custard from Sri Lanka, sweetened with natural kithul jaggery and spiced with cardamom, cinnamon, and nutmeg, but in an eggless version.

Though quite similar to South Indian food, Sri Lankan Cuisine has its own distinct personality. Every dish is uniquely spiced with a Sri Lankan flavor, even those that have foreign roots. From desserts to snacks, most dishes use locally grown fruit, seafood, and, most importantly, spices. The use of bold, flavorful spices is so characteristic to Sri Lankan cuisine, that it led to the island nation being dubbed ‘Spice Island’.

Coconuts are the lifeline of Sri Lankan cuisine. Coconut oil is the oil of choice for grilling, deep-frying, and tempering. Coconut milk is added to the majority of curries to create a creamy gravy. Coconut flesh is grated to make a spicy pol sambol used as an accompaniment for rice and bread. Grated coconut is also the base for many Sri Lankan sweets like pol toffee.

So here I have come up with a dessert from this cuisine with a coconut base as Watalappan.

It is quite similar to flan but made from coconut and like any good island dessert, the coconut palm sugar jaggery.

Watalappan, which is very popular with Sri Lankan Muslims, is a must for their religious festivals. It is a rich steamed pudding prepared with egg, jaggery, coconut milk and spices like cinnamon, cardamom and nutmeg. The aromatic spices lend the characteristic flavour to this silky smooth dessert.

Although watalappan is traditionally a Muslim dessert prepared during the Ramadan season, it has become a staple of Sri Lankan cuisine over time. Nowadays one can find it in many restaurants across the country.

Well, the recipe which I am going to share here is an eggless version of the much popular Watalappan. 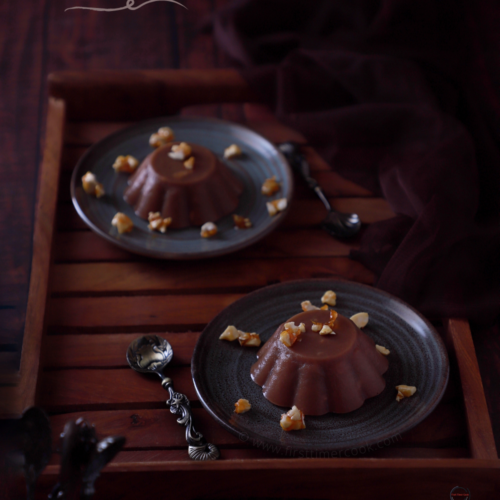